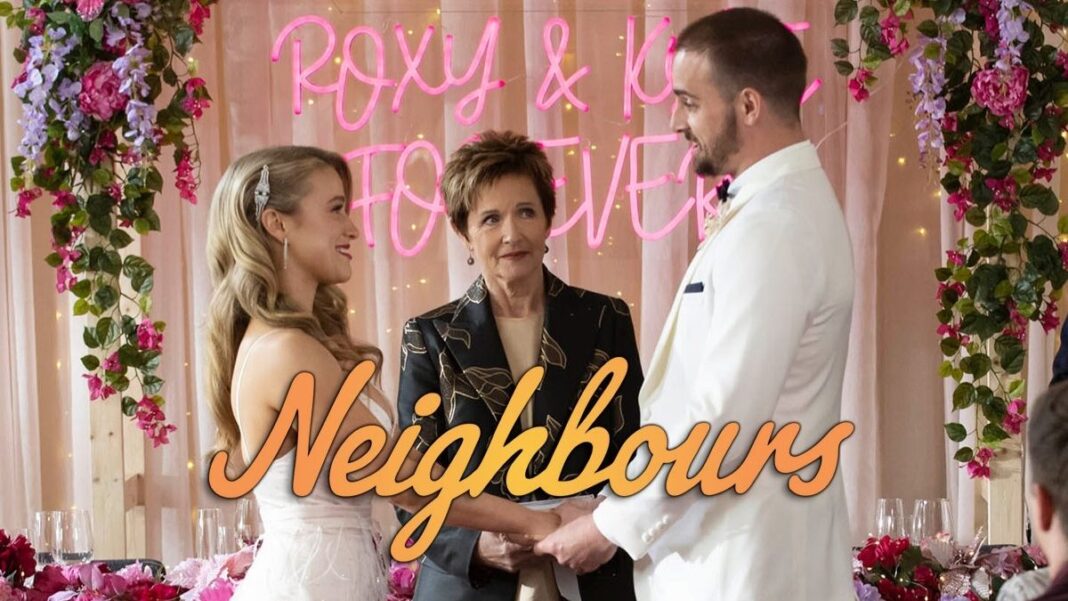 Wedding bells will ring out across Erinsborough next week on Neighbours, as Kyle Canning and Roxy Willis finally tie the knot.

They’ve only been together for a little more than two years, but they’re head over heels in love. Kyle’s testicular cancer diagnosis may have pushed their wedding date forward, but that doesn’t make the occasion any less precious.

The couple marry on UK screens next Tuesday, January 18th, and in Australia two days later, on Thursday, January 20th, surrounded by their friends and family and hastily but professionally organised by wedding planner Mick Allsop (Joel Creasey).

Take a look through their wedding gallery as we get ready for the biggest Ramsay Street wedding of the year.

Terese (Rebekah Elmaloglou) didn’t feel worthy of the role after her recent struggles led to a near-death experience, and Roxy shunned Harlow (Jemma Donovan) after her former best friend all but cut her out of her life.

Thankfully, she had plenty of wedding options, and bridesmaid Mackenzie (Georgie Stone) and Matron of Honor Sheila (Colette Mann) look stunning in their red and purple ensembles.

Meanwhile, Kyle has picked half-brother Levi (Richie Morris) as his best man and close buddy Toadie (Ryan Moloney) as his groomsman – the latter having recently been named Neighbours’ Most Popular Character.

Toadie has three weddings under his belt, one of which was a faux marriage to Steph Scully (Carla Bonner) and the other two of which ended in disaster.

He feels much more at ease attending as a guest, this time with Melanie (Lucinda Cowden).

However, it appears that Erinsborough, rather than Toadie, is cursed. Tragic events are still on the road…

Hugo gets dressed as a page boy, and Nell (Scarlett Anderson) makes a lovely flower girl.

Harlow did, after all, get an invite. Harlow has been riling up Ramsay Street residents in recent weeks — she couldn’t care less when Kyle was diagnosed with cancer, and when Terese nearly went over the roof of Lassiters, all Harlow cared about were the documents she’d thrown from the building.

Roxy had had enough of her bad attitude and informed her last week that it might be best if she didn’t attend the wedding at all.

Thankfully, it appears that the ex-best friends kiss and makeup, and Harlow attends the wedding with her grandfather, Paul, who is also disliked by half of the guests.

Mackenzie and Hendrix began dating in 2021 after bonding over their attempts to get over their respective ex-boyfriends, Richie and Harlow.

Their mutual love of video games, zombies, and, more recently, bedroom shenanigans make them one of the loveliest couples of recent years, far more easygoing than with their exes.

They may have only rejoined for Abigail’s sake, but they’ve been growing closer in recent weeks, and it appears love is back in the air.

This week, Leo invites Britney to his wedding as his plus one, and all signs lead to them falling in love.

Aaron, David, and Nicolette have had a particularly trying year, but they’ve been able to put the events of the last several months behind them, and the big day is all smiles.

Glen may not have had much interaction with Kyle or Roxy thus far, but he does have a family tie with them. He had a romance with Roxy’s mother, Gemma Willis (Beth Buchanan), and plans to revive the flame when Gemma returns for the wedding.

It’s time for Kyle and Roxy to tie the knot, with all the glitz and glamour in full swing and their friends and family seated!

Kyle’s only option now is to wait for his bride-to-be to arrive.

Kyle’s father, Gary, who perished at the hands of Finn Kelly in 2020, is absent from the proceedings. Gary the Pigeon, who arrives just in time to serve as ring bearer, carries on his legacy.

Finally, the bride, escorted by her mother, enters the room.

Gemma was hesitant to give Roxy and Kyle her blessing at first, but she finally realises that her daughter loves Kyle and agrees to let her go.

The ceremony may begin now that everyone is in their proper seats!

Kyle and Roxy have their first kiss as a married couple after exchanging vows.

Everyone celebrates with a fist bump between half-siblings.

It’s time to eat some cake!

As wedding singer Karl enters the stage, not everything goes Kyle and Roxy’s way…

Simply inhale deeply, smile and nod, and wait for it to pass.

While the wedding went off without a hitch, there is trouble on the horizon. As the storm approaches, someone will perish, but who?

Kyle and Roxy’s wedding will air in the United Kingdom on Tuesday, January 18th, and in Australia on Thursday, January 20th.